“What Do You Hope to Change?” – Travels Through Mexico and Cuba – Part IV – Mérida & The Art of Indigenous Culture and Resistance

Mérida was the second destination on our trip. After just one night and one day in Cancun we decided to head deep into the heart of the Yucatán Peninsula. We chose Mérida over Campeche after much discussion; it seemed that Mérida was a bit closer. We hopped on the ADO bus that whisked us along back country highways late at night and arrived in city with a bustling population of over 800,000.

We sleepily stumbled off the bus, grabbed our hiking backpacks and started our aimless trek through the streets in search of a cheap hotel. We found one that catered mostly to locals and other Mexicans and paid 320 Mexican pesos for the night. We crashed the a small room with the flattened mattress, eager for what was in store for us the next day.

Inside the hotel we stayed at. 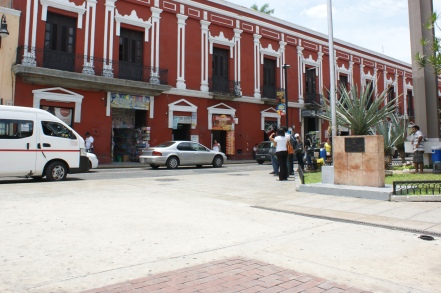 A view on the outside.

Like we did in Cancun and without much of a plan, we walked around the whole day. Mérida in many ways is locked in its colonial past. It was once called T’ho by the indigenous Maya and was a beautifully planned ancient city. The Spanish conquistadors who invaded felt that the impressive stone walkways and architecture reminded them of the ancient Roman ruins of Mérida, Spain. The violent onslaught of conquest started here the same way it started in many other places. The indigenous name was erased and then Europeanized. But that was not enough. A total war was waged on the Maya, their culture and their beloved city. The Spanish, although initially in awe of the beauty of the towns and cities they encountered in Mexico, felt the need to destroy what they saw for it was still foreign and not Catholic. Out of the destruction of T’ho the Spanish created colonial buildings and a Catholic church. Although they do exist here and there, I did not see any remnants of the original Maya city of T’ho. I could only imagine the horrors unleashed on the population by the Spanish.

Today, although the colonial architecture of the Spanish appears to proclaim that the conquest of Spain was a complete success for the invaders, many local Mayas suggest that this is not so. Resistance to colonial occupation can appear in many different forms; in some cases, this resistance lives through survival and existence. are Mayan and suggest that, no, the resistance has continued through the survival of their existence. I noticed this in different ways as we eventually found our way to the historic center of the city, Plaza Grande. This was once the parade ground for the Spanish occupiers and before them it was the religious and cultural center in T’ho. Today, for a new generation of those descendants of the Spanish invaders as well as the Mayas of T’ho, it continues as the center, the heart of the city. 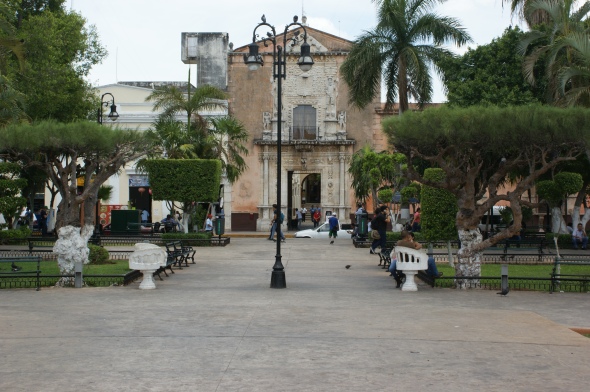 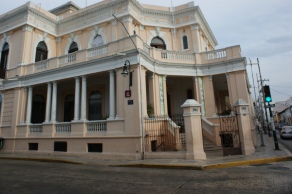 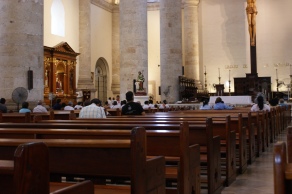 Michelle and I stood in wonder as we looked around Plaza Grande while the morning sun beat down us. We attempted to enter the art museum but it was closed for renovations. However, just outside the museum were several sculptures, some of which told the story of mass migration from Mexico. They expressed the confusion, uncertainty, pain, risk, hope and fear of the unknown that many migrants face in their travels north. That was something I thought about often on the trip. I thought of all the undocumented workers, migrants, my friends and compañeros back home who slave away in poor working conditions, who have been separated from their families for months or years, who are fighting for a better world in a profoundly unjust society. And here we were, able to freely cross the border without much hassle, while a sea of migrants risked their lives every day to find opportunities elsewhere. As I often do in these situations, I started thinking of the violence and absurdity we know as borders. I began dreaming of a world without borders. Will we ever create that world? Will it happen in my lifetime?

We ventured around the sculptures in a somber silence, then walked into the first interesting building we saw that we soon discovered was called Casa de Montejo. It is an old colonial building built in 1549 that evolved from barracks that housed the occupation forces from Spain, to a mansion owned by the Montejo family and finally, a museum free and open to the public. The entrance to the building barks out the warped world view of the conquistadors. Sculpted into the facade are conquistadors standing on top of the conquered. Inside was a different atmosphere. There was a collection of paintings, Victorian and neo-Renaissance furnishings, and various sculptures, pottery and Mayan handicrafts. It felt like the Casa was an explosion of the colonial and the indigenous, captured and put on display, leaving one to contemplate the countless stories behind every artifact and every piece of artwork, despite the proclamations of the conquistadors carved into the face of the building. When we were finished taking in the opulence and decadence of the first building, we ventured back into Plaza Grande to figure out our next stop.

Jaguars inside the Casa. Jaguars are important in Maya culture. 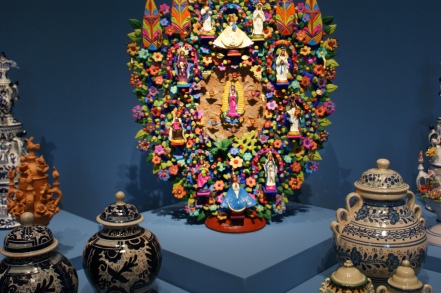 A middle-aged man came up to us and started to talk with us. He introduced himself as José and asked if we were new to Mérida. Our answer put a smile on his face. He said he used to work as a tour guide in town and suggested a number of sites for us to see. Unfortunately, we could not make the major festival that was happening at night, but we could look at the Maya cooperative and some of the historic buildings he suggested. We thanked José and ventured off to one side of Plaza Grande for our first site to check out.

We went around the corner in search of a Maya artist and artisan cooperative José told us we had see. He claimed it was something that was not promoted by guide books or tourist information booths. We found the building and walked in. Every floor, every room, every square inch was covered with some kind of handicraft, textile, artwork, and even hammocks. We were the only ones in the two story building, aside a few of the workers there. One of the workers explained to us that the cooperative It was run by countless indigenous artists, artisans and families from around the whole region.

He tried to sell us hammocks. If I had the money I would have bought one, but we were on a tight budget. He told us in English that was much better than our Spanish that “The poor people, the indigenous sleep in hammocks. They don’t need blankets or large beds because they use fans. The rich people use beds and blankets because they have air conditioners.” He opened a book of pictures to show us the painstaking process of making hammocks. “These are made out of a plant – sisal. These are much stronger than the touristy hammocks you usually see.” Hammocks, rugs, even clothes are made from the sisal fibers of Agave. This practice was originated by the Maya nearly 2,000 years ago. The fact that it still exists to this day can be viewed in a way as a form of indigenous resistance. The conquest of Mexico was not a complete victory for the Spanish and even cultural practices like this one are part of the battle for survival and forging a new way ahead.

The artist and artisan cooperative/

Michelle tries out one of the sisal hammocks.

We thanked him for his time, and in one last attempt to sell us a hammock, he reached into a drawer and pulled out a little book. “You know, you can do other things with hammocks.” It was a manual – kama sutra meets sisal hammocks – and I learned about the art of making love in a hammock. Poorly drawn picture after picture, leaving much to the imagination, was shown to us with a nonchalance that only a hammock salesman can muster when discussing such matters. I felt my face heating up and I started to sweat. I had to bite my lower lip to prevent myself from laughing. Michelle and I looked at each other, then at him, and back at each other again. We told him we would come back some other time, and made our exit. We went down the stairs and out into the street and let out a burst of laughter. There was no time to dwell on hammocks – we had to go to our next stop. The things you learn in Mérida…

The century-old Palacio de Gobierno was the second place José told us to see. One room inside was covered with enormous paintings by local artist Fernando Castro Pacheco. They were completed in 1978 but took a long, arduous twenty-five years to complete. In a way that only an artist can master, he captured the real history of the Maya, the conquest and the countless acts of resistance against imperial occupation, and rule by the rich. Some of the paintings showed the march of the conquistadors and the Mayas fighting back in different ways. Others captured scenes from the Mexican Revolution as well as the War of the Castes that was fought between Mayas and the elites of the Yucatán during the second half of the nineteenth century. The paintings have the power of pulling out ideas and emotions from people who look at them, demanding that the viewer think deeply about both the tragedies and resistance that have shaped Mexico over the years. 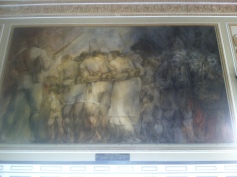 We left the Palacio de Gobierno, the cooperative, the Casa and Plaza Grande and slowly meandered back to our hotel. I felt moved. What I witnessed, through the art and architecture, the cultural expressions and practices, the history, the present, the continued indigenous resistance, touched me profoundly. I thought about that. Deeply. In a way, what we saw in Mérida was an art of indigenous resistance and it was expressed in countless forms. We kept walking. And then Michelle stopped.

She was looking at some graffiti on a building. “No + RIP 43“ – “PIENSA Y DECIDE” We looked at each other. The graffiti was in reference to the 43 students from Ayotzinapa, Mexico who mysteriously disappeared in September of 2014 and were never to be found again. A massive political upheaval swept the country after their disappearance as people found out that drug cartels, mercenaries and politicians were all involved in their disappearance. The graffiti was the first of many we would see on the trip referencing the Ayotzinapa 43. And what about “PIENSA Y DECIDE”? “Think and decide.” The state elections were coming up in Mexico and we did not even know beforehand. Mass social movements and elections of corrupt politicians are an explosive mix in Mexican politics. We would see that first hand throughout the rest of the trip.

We ate some food, headed back to the hotel, packed up and started to walk over to the ADO bus station. We were anticipating our overnight trip that would take us to Palenque in the state of Chiapas We were on our way to Zapatista territory where 1,000 revolutionary indigenous Maya villages exist. The 43 students were still missing with millions of Mexicans demanding answers from the government about their disappearance. And it was election time.