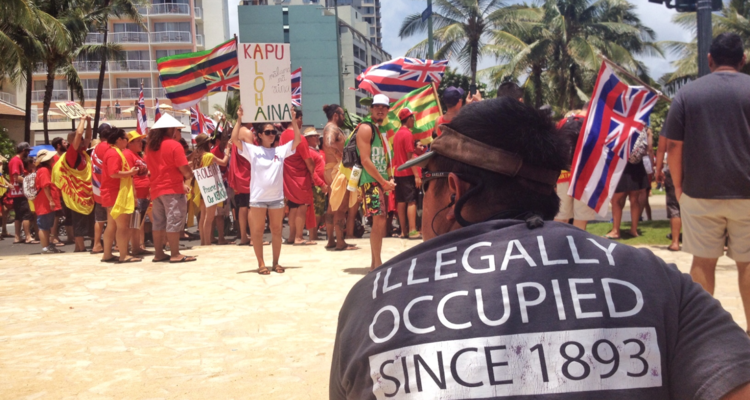 On the Roots of Hawaiian Resistance: A Young Kiaʻi Recounts Injustices, Broken Promises in Hawaiian History

by Thomas-Ryan Cleek / Love and Rage

“Endless is the good that I have given for you to enjoy.” The supposed last words of King Kamehameha the Great.

If King Kamehameha had lived to see what would become of his kingdom, he would see what we see: an island chain with a delicate ecosystem and very finite resources.

Perhaps Hawaii State Governor David Ige feels that the resources of Hawaii are indeed for everyone to enjoy, or maybe he feels that they are meant for lofty bureaucrats and businessmen to invest and profit from. Whatever the case, there is one ever looming fact which always seems to be overlooked: the islands of Hawaiʻi and the profits reaped from its lush lands are stolen.

The geopolitical history of Hawaiʻi is convoluted to say the least. In order to keep this brief, I will mention that in the US’s attempt to subdue Hawaiʻi a treaty of annexation was failed to be ratified, and it was instead made a territory through Joint Resolution. A Joint Resolution is very much like a Bill in the way that it only affects those within the legal jurisdiction of the US. Annexation of another country cannot be achieved through Joint Resolution.

Knowing this, we can logically conclude that any governmental entity formed under the US in Hawaiʻi after year 1893 is not only illegitimate, but also illegal as admitted by the US itself per the “Apology Resolution” of 1993. This “apology” would be the second time that US officials acknowledge the subterfuge employed in the US’s acquisition of Hawaiʻi, the first being in the “Blount Report” of 1893, over a century ago.

This means that both the US government and the State of Hawaii knew that the Kingdom of Hawaiʻi was unlawfully deposed for over a century, yet have done little to nothing in rectifying their transgressions. Instead, they proceed as if nothing had ever transpired at all.

What we see in Hawaiʻi today, in regards to cultural, social, and political activism, is a response to the blatant neglect shown to kānaka maoli, Native Hawaiians, and our interests by the State of Hawaii and the US government.

Some may say that we kānaka maoli have been given reparations through the Hawaiian Homes Commission Act, but fail to realize that there are over 20,000 people on the waiting list for these homesteads and that many of them lived their entire lives and died waiting on that list never to receive their homestead. Not to mention the required blood-quantum of one-half Native Hawaiian, which is essentially a divisive tool used in systemic ethnic genocide.

Meanwhile, the US military continues to literally bombard our sacred lands. Previously, sites such as Mākua valley on Oʻahu and the entire island of Kahoʻolawe, near Maui, were used as target practice for US ships, but now they use Pōhakuloa on Hawaiʻi Island. These once pristine lands are now ravaged by unexploded ordinance and depleted uranium, making it impossible to ever live upon again.

The State of Hawaii attempted to reconcile the strife of kānaka maoli by creating the Office of Hawaiian Affairs (OHA) in 1978. Despite this, OHA has failed time and time again in adequately representing the collective interests of kānaka maoli, made evident in OHA Trustee William Aila’s contrary stance to the issue of the Thirty-Meter Telescope on Mauna Kea against the voices of tens of thousands of his constituents.

Issues faced by kānaka maoli are deep-seated, and what we are seeing today in places like Hūnānāniho, Kahuku, and Kalaeloa on Oʻahu, Hanapēpē on Kauaʻi, or Puʻuhuluhulu on Hawaiʻi Island are absolutely unprecedented. These movements are direct reactions to many of the issues I have mentioned previously. Protest has become the norm for many in Hawaiʻi, haole, or foreigner, and kānaka maoli alike. As elders see the youth becoming more involved, the future success of the Hawaiian Sovereignty Movement seems assured.

We have begun to question the status quo and started to entertain the possibility of returning to a state of sovereignty. As for the course by which we will navigate towards this end is to be determined by the collective lāhui, nation, of Hawaiʻi. Not any one person can solve the problems of thousands, myself included, especially without taking into consideration the sentiments of the many.

Hawaiʻi State Governor David Ige, Honolulu Mayor Kirk Caldwell, Hawaiʻi Island Mayor Harry Kim, and all the other politicians in charge of our government should heed the wishes of those people whose birthright it is to live upon these lands, especially before heeding the desires of foreign interests. To paraphrase Queen Liliʻuokalani, “To [ignore] so general a request, [you] must be deaf to the voice of the people, which tradition tells us is the voice of God.”

Thomas-Ryan Cleek, a Native Hawaiian, was born and raised in Kapolei, Hawaiʻi, where he currently resides. He was a student at the University of Hawaiʻi, and has studied Hawaiian language, history, and mythology for over five years now. Thomas-Ryan has been involved with community efforts to restore Hawaiian cultural sites since 2016 and has gone before Hawaii State entities to plead on certain issues, specifically regarding Kalaeloa Heritage Legacy Foundation and Waimānalo Gulch Sanitary Landfill. His involvement with the Native Hawaiian community is unquestionable. In his free time, he uses his knowledge in Hawaiian mythology to bring to light stories from Hawaiian antiquity. He hopes to show his contemporaries the illustrious past of a place deemed to be a barren waste. Through this, he has honed his ability to deliver his ideas in a clear and comprehensive manner.