DIJON, France – Over a hundred anti-capitalists have created a nine hectare free district with urban gardens and a free market as they prevent development plans from being constructed. The occupiers are seeking to preserve agricultural land and experiment in collective living while demonstrating horizontal forms of community building.

Presenters from the self-managed Quartier Libre des Lentillères, or Free District of Lentillères, spoke at the Athens Polytechnic University in early June 2018, for the second Networks of Resistance-European Local Struggles Conference.

Starting with a protest in the center of Dijon, France, in the midst of a chilly day in 2010, about 150 people embarked for an abandoned lot, cleaned it up, occupied the area, and formed the Lentillères (lentil garden). Eight years later, the urban gardens of the Lentillères encompasses a free zone of over nine hectares that is, by its existence, resisting against development projects while demonstrating “another way of being that [is] non-hierarchical and egalitarian and free.”

Dijon, the capital of France’s Golden Coast in the Burgundy region famous for wine and monasteries, is an area rich in history and home to 250,000 people. Presenters said that politicians and developers utilize the history to attract investment. The municipality has been busy with plans to modernize Dijon by building new streets, shopping centers, and installing thousands of CCTV cameras. Developers in Dijon now plan to build 15 new housing projects in what they call ‘eco-quarters’ by 2020.

Recent history of anarcho-punk culture from 1980s-90s is also embedded in the city. Massive “anarcho-fun gigs” in the squatted industrial wastelands of Dijon took place in efforts to reclaim space from capitalism. The more accepting culture of squatting and land defense in France helped lead to the local, socialist-run government of Dijon essentially allowing anti-capitalists and anarchists to take the space they desired with no problems, the presenters said.

The continued occupation of the land by over twelve collectives and more than 100 people living in the Lentillères are now threatened by the second phase of the encroaching ‘eco-quarters’ project.

The architecture firm Maud Caubet has blueprints of the ‘Arsenal Eco-district in Dijon’, and promotes their project with a rhetorical flourish:

“Through its rooftop gardens, interactions with the local school, indoors gardens surrounded by trees that bring freshness and nature, our project imposes a new standard.” -Maud Caubet

Depiction of what the architects of the Arsenal eco-quarter in Dijon say one of the new housing projects will look like. (photo via Maud Caubet)

Yet, those occupying the lands that phase 2 is set to embark on don’t agree with the “new standard“, saying the project was “green-washed“:

“They know that by calling something ‘eco’, meaning kind of green, it’s a good way to make it acceptable for the population.”

During the presentation in Polytechnic, pictures were shown of phase 1 of the eco-quarter on the large screen in the room as the speaker said, “there is nothing very especially green on the eco-quarter” and that the housing units was just “concrete on the ground.” Slides of pictures of phase 1 of the eco-quarter shown during presentation.

Three major agricultural projects are self-managed in the occupied space: the collective garden, the collective farm that grows produce for the free market, and private individual gardens. A garage, bike workshop, health and well-being space, sewing workshop, camping space, a hangar which hosts concerts, a free shop, a social space, and a summer market are among the ways occupiers are using the land.

“Mixed in amongst that are all of the kind of, lets say like urban projects or the collective living projects. We kind of have our own version of urbanization in a way that’s happening in the Lentillères.” – Presenter from Lentillères

The beginning area of the first collective garden at the Lentillères. (photo via Quartier Des Lentillères)

In the past eight years there have been various actions that have taken place to lead the gardeners to where they are right now. In the beginning of the occupation they didn’t know how to build structures but they started small and obtained knowledge to make their first cabins on the land, said the occupiers.

Early on, when they renovated buildings and squatted them, the city destroyed them, one of which was La Boucherie, a squat for migrants in 2011-2012:

“We were part of this support for migrant people. In 2011, it was like an explosion of the borders in Libya and many people arriving in this city … We decided to open squats in the area where we are living, so it last a few months or so, and it was destroyed after.”

Popularity started to bloom as many in the community came out to support after police operations. “This thing that the town decided to destroy, finally it became popular for us to say, okay, they don’t need this land, the project for the moment is not for now, and we have something to do with this earth.”

A weekly free market was started after the destruction from the police raid on another squatted building named Les Trous in April 2012.  The free market continues to grow and is operational during the growing season. 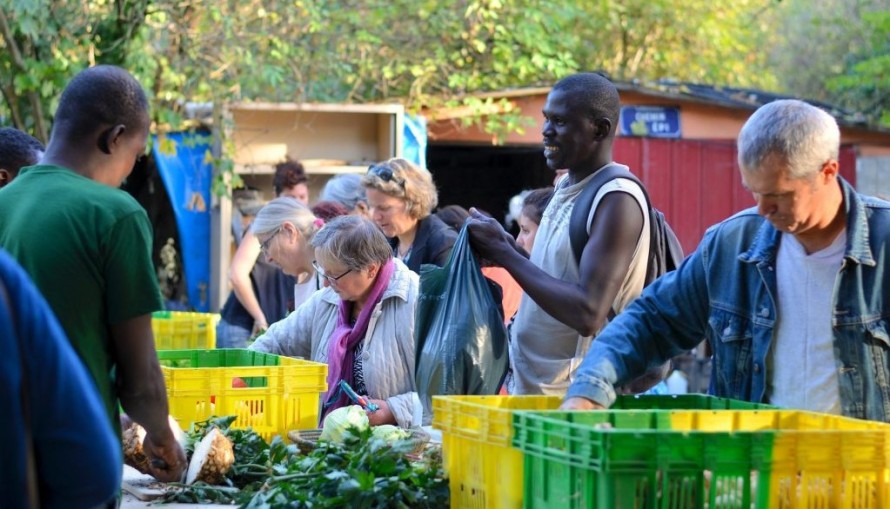 Picture of the free market. (photo via Lentillères website)

Because of the stability established in 2012, occupiers started to build their own permanent structures out of recycled material. They started to move caravans into the quarters, transforming trucks into bathrooms, cabins, and also houses.

“In the course of the eight years that the land has been occupied, it’s changed from being a kind of abandoned piece of old agricultural land to a really vibrant piece of land with lots of uses. It’s currently home to just over a hundred people but it’s used by many many more people, there’s lots of people from the neighborhood who come and make their garden there.” – Presenter from Lentillères

A diverse assortment of people are working together building gardens and sharing skills in the Lentillères. One of the presenters said: “when people do come in this area that’s part of what is quite special that you see all these diverse people managing to work together and it’s not always easy.”

Lentillères has a monthly assembly, which was described as “a space where anyone who’s involved in a project can come and we make decisions together.” They discuss events in the garden, new collectives starting up, new uses for different parts of the land and offshoot assemblies get created to “address different topics”. For example, “for the last year, there’s been monthly assembly to talk about defense of the quarter.” 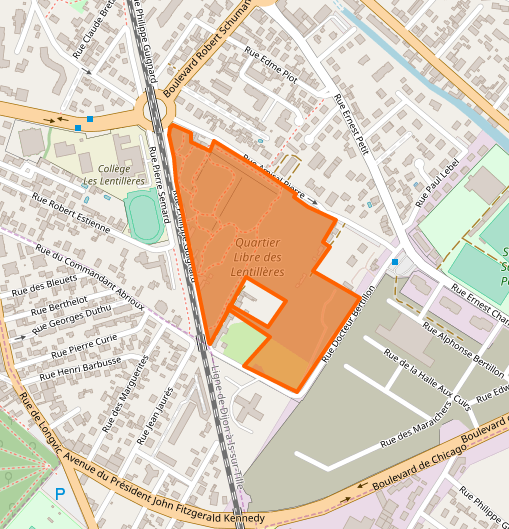 A map detailing the free district of the Lentillères is in Dijon, France. (photo via Lentillères website)

Different traditions have been taking place over the last eight years and weekend party events during the spring and autumn. They throw collective work weeks where people gather and build different structures together.

Occupiers from the Lentillères said they are very connected to the other ZADs, or Zones to Defend, in France, and explained that “with it was this idea of autonomy, meaning we should re-appropriate the different knowledge to make a big garden, build a cabin and also be much more rooted, rather than these protest movements.” They continued:

After failing in their attempted eviction of the feminist living space La Cyprine, the police have not made any evictions in the last two years. In the beginning, the presenter said that “it was a surprise for the town … they know when you are squatting a building and there is a trial and after they can destroy but for a garden, it was a bit new for them. How to evict a garden they didn’t know … they didn’t know how to react. At the same time they were not the owner at the beginning” so they couldn’t evict them.

Yet, those from the Lentillères say their connection to ZAD-NDDL has presumably made it harder to have demos in the city center, “from the beginning it was okay to go in the city center and now its getting hard because the town, they know we are connected to the ZAD movement … Now each time we want to do something in the city they put a lot of police.” 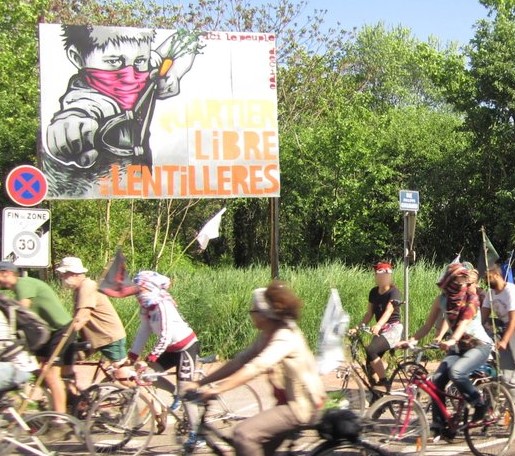 On April 25, 2018, cyclists went from Lentillères to the center of Dijon to announce a protest during the week of resistance (photo via @DijonDTR)

In April 2018, a week of resistance with skill shares, discussions, demos, and concerts took place in the Lentillères to focus plans on defending and securing their squatted free zone as the city continues to move forward with their plans of phase two of the eco-quarter.

Check out their website to learn more about Lentillères.

Stay tuned to Unicorn Riot as we will be publishing the other presentations from the Networks of Resistance II, as well as traveling to Greece to continue bringing our international coverage spotlighting sustainable ways of living, horizontal organizing, mutual aid, alternative economies, and more. Last year, activists from ZAD, Bure, Hambach, as well as the Cooperativa Integral of Catalonia and the DIY internet of ExarcheiaNet presented at the conference. The momentum of introducing new ideas, methods, and forms of struggle continued this year, as presenters came from Lentillères, the Heraklion Autonomous Market (an offshoot of Athens Integral Cooperative), the designer of a digital app for social currency, and Pablo Prieto (Prieto presented about Cooperativa Integral last year) who is currently in Kurdistan.

This article was re-published on Love and Rage according to Creative Commons licensing guidelines.