Reporting Back from the World Social Forum in Montreal

Another world is possible. This is the simple yet piercing slogan of the World Social Forum (WSF) which is currently underway in Montreal. The WSF is the nexus of social movements, activists and resistance the world over. It has been called “the movement of movements” by the global justice movement. Since its inception in 2001 in Porto Alegre, Brazil, it has facilitated dialogue and debate within the broader Left about what kind of alternative and what kind of world we want to create, how we can create that world and if, in fact it is possible. The 50,000 activists and 5,000 organizations gathering for this year’s forum, the first of its kind in the Global North, continue to discuss the complex myriad of problems inherent in the global capitalist system, punctuating this with fierce debate, and envisioning what kind of alternative it is we want. Montreal shows the way forward, but only in part. 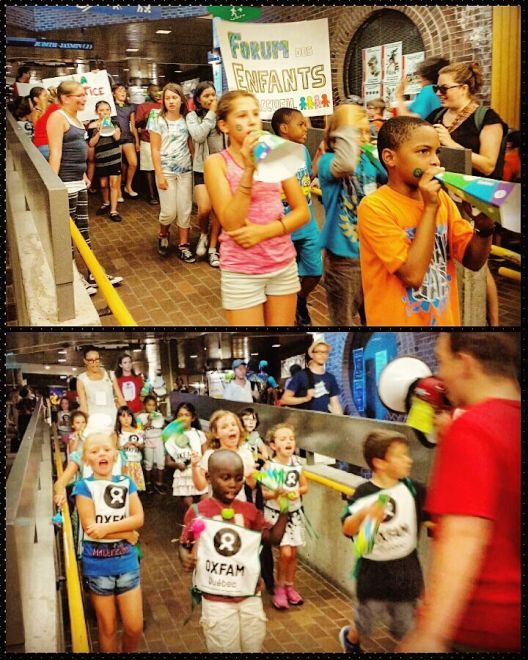 Children march and chant at the WSF. Credit: Marco Martoccia

I attended the WSF with Marco, a fellow activist from Utica who spent two weeks canoing from Utica to Montreal to attend the forum, and Michelle, a New York City based activist. The political struggles we come from blend seamlessly within the web of movements that cradle the WSF.

The Forum is spread throughout Montreal. At any given moment, workshops, cultural and art displays, lectures and even demonstrations carve out a new territory of resistance across the urban landscape. The main hub of the Forum is at The University of Quebec in Montreal (UQAM) as well as McGill University, fitting locations given the history of student movements and social struggle at these universities. When we arrived in Montreal on Tuesday, a local union activist with the Wobblies gave us a tour of UQAM, showing us where the student unions are located, and pointing out where various strikes, riots and battles with the police happened on campus. Montreal and Quebec are home to very large, active and militant student union, labor and radical movements.

On Wednesday the three of us entered the whirlwind of workshops and dialogues. For a moment we dropped in on a lecture hall filled beyond capacity to listen to the world-renowned sociologist and creator of World-Systems Analysis Immanuel Wallerstein. The crowd was entranced by Wallerstein as he discussed global inequality and gave a hopeful message of real world resistance to capitalist exploitation. We then ventured up to the Montreal Arts Interculturelsto watch a powerful documentary that gave a heart-wrenching view of the refugee crisis across Europe with a special focus on a young Kurdish man desperately attempting to find a place called home. The madness of imperialist war, nation states and borders left us wondering how this all began and how we can transcend this.

We left the film and stepped into the Montreal heat outside as we started to walk down Rue Jeanne-Mance toward UQAM. Although it seemed like we had an endless choice of panels and workshops to attend on every subject imaginable, we decided to attend a panel titled “The Struggles of the Palestinian Working Class and the Global Solidarity Movement of Palestine.” The activists on the panel, some Palestinian and some Palestinian solidarity activists from across Europe and Latin America, discussed the critical junction that the Palestinian liberation movement is at today and explained how successful the BDS campaign has been in recent years to pressure the system of Israeli apartheid and colonialism. One activist called the panel “a process, an intervention” that challenged activists to give a critical look at the problems and contradictionswithinthe Palestinian liberation movement. She encouraged us to look outside of the failed political projects of the PA and PLO as well as the mainstream trade unions in Palestine. New and more egalitarian methods of resistance have sprung out of the alternative mass based movements in Palestine not connected to any political party. Panelists also discussed the movement to defend social security, the teachers’ movement and the General Federation of Independent Unions as recent developments that may point to a different trajectory and future for Palestinian freedom.

Palestinian Art on display at the WSF

In the evening we viewed another film down the street from UQAM that was shown in a small theater hidden in the back of a cafe. The documentary uncovered the layers of deception and lies given at every level of the Mexican government in covering up the 2014 state-backed massacre of the Ayotzinapa 43. A mass movement in Mexico is still raging over this massacre of students from a left wing teachers’ college. After the movie an activist brought the audience to our feat and many of us to tears as she asked us if we knew where the disappeared were. I was brought back to when I went to Oaxaca, Mexico last summer and participated in a mass demonstration of teachers who, alongside several parents of the disappeared students, called for justice and demanded answers from the federal government. Everywhere I went in Mexico, I saw graffiti in support of the Ayotzinapa 43. The Mexican military was deployed across the states of Guerrero and Oaxaca to help facilitate the corrupt elections and to prevent the resistance in the streets from spilling over and interfering with the state election process. One year later and the resistance on the streets of Mexico reverberates through the forum in Montreal.

As we departed the theater, I thought of the Ayotzinapa students, the struggle for freedom in Palestine, of greater questions of global injustice and inequality in the world. I thought of how social movements attempt, little by little, to creatively construct a new world, “a world where many worlds fit” as the Zapatistas say. I thought about my impoverished, stratified, crumbling hometown of Utica and what kind of alternative we as activists can make there.

As I sat on a street corner with Marco, he informed me that one of the big names that was tied to the WSF who was scheduled to speak that evening canceled at the last minute. It was Bernie Sanders. We laughed and cracked some jokes about a failed revolution that never was, one that was a mile wide and an inch deep and one that was only successful in channeling a lot of anger in the US into the dead-end unimaginative politics of the Democratic Party. It only made sense that Sanders distanced himself from such a process as the WSF, shortly after he endorsed Hillary Clinton, the preferred candidate of Wall Street, K Street and the Pentagon.

Street Graffiti on the sidewalk in Montreal. Credit: Marco Martoccia

Perhaps activists in the US could take something away from the World Social Forum process. Rather than concentrating efforts around electoralism, political personalities and political parties, it makes more sense to center our struggle in the grassroots, with the people and with the radical notion that wecancreate an alternative outside of capitalism, constant warfare and oppression. We can start this with critical dialogue and a visionary imagination. People appear to have caught on to these ideas in the streets of Mexico, Palestine and Montreal. Another world is possible in those places and is also possible, even probable in places like upstate New York. But change does not happen on its own. We have to fight for that world every day.