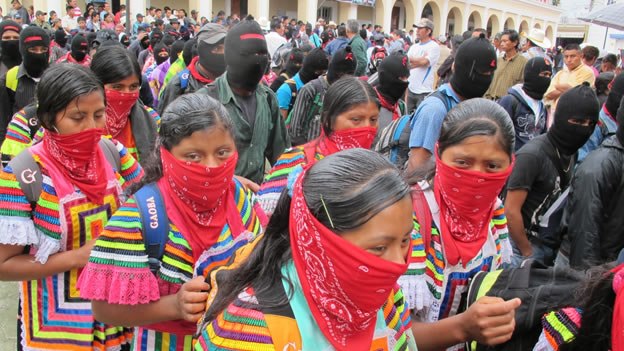 On January, 1, 1994 the Zapatista Army of National Liberation (EZLN), otherwise known as the Zapatistas, entered the global stage the very same day NAFTA came into effect when they launched a revolutionary uprising in Chiapas, Mexico. The masked revolutionary indigenous Maya insurgents claimed it was a war for survival for indigenous people. Since that day they have been in a declared war against the Mexican state.

The Zapatistas faced brutal military and state repression, massacres and targeted assassinations. Their communities remain under a stage of low intensity warfare to this day, but, “little by little” as the Zapatistas say, they are creating a new world. Over 1,000 villages in Chiapas are under Zapatista control and are governed by a system rooted in concepts of mutual aid, cooperation, self-determination, direct democracy and a fierce anti-capitalist ethos. A synthesis of socialism, anarchism and indigenous Maya beliefs have created a new way of understanding the world called Zapatismo. The Zapatistas have influenced not only the broader Left in Mexico, but the greater Global Justice Movement around the world, as more movements and groups have taken up the mantle of Zapatismo.

“Some Zapatista Principles and Practices”

The Mohawk Valley Freedom School is a project run by the Industrial Workers of the World. You can find out more about the program for liberatory education here.

Tagged as: IWW, Mohawk Valley Freedom School, The Other Side Gallery, Zapatistas