New Hartford – Shawkat Jamil Dallal was born in Jerusalem, Palestine, on 25 October, 1931. He passed from this life quietly with his wife, children and grandchildren by his side on Sunday, 3 July, 2016. He spent his last days at home with his family.

Shaw, as his American friends called him, left Palestine as a teenager in 1949. He stopped 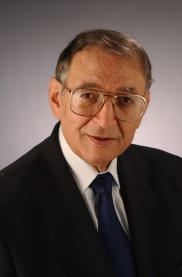 first in Kuwait, where he worked and was encouraged to apply to schools in the US. He did, and met his wife, Diana Fuller, while attending Cornell University. Shaw went on to graduate from Cornell School of Law in 1959. His career was diverse and spanned continents. He practiced law in Buffalo and Utica, New York, in his earlier years, and went on to work as legal counsel to the Organization of Arab Petroleum Exporting Countries (OAPEC) in Kuwait in the early 1970’s, before starting his own internationally recognized business, also in Kuwait. He returned to the US in the mid-1980’s, where he continued a variety of business ventures; he was an advisor in the founding of a medical school in the Dominican Republic and also served on its board.

Shaw taught courses at Mohawk Valley Community College, Utica College and Syracuse University. He retired from Colgate University as Professor Emeritus. He enjoyed a rapport with his students and took pride in their achievements. His dedication to teaching and speaking were inspired by his experience and lifelong commitment to raising awareness about injustice and human rights violations in Palestine. He also assisted in piloting Arabic language programs at Syracuse and Colgate universities before he retired from teaching. He was known for his writing and extensive knowledge and understanding of Palestinian and Middle Eastern history. He authored two books: the first a work of historical fiction based on his Palestinian life story, and the second a novel. Shaw also served as a commissioner on the board of the Palestinian Independent Commission for Human Rights for several years.

It is with sadness that his family says goodbye to him, particularly while his beloved homeland remains occupied and strife-ridden, a history he endured personally. Shaw was outgoing and generous. He leaves close friends from all over the world, many of whom contacted him in his last days. Shaw leaves his wife of 62 years, Diana Fuller Dallal; and three children, Steven (Teresa Marziano Dallal), Donna, and Thomas (Diana Buttu). He leaves two living sisters, Omaya, and Montaha, currently of Amman, Jordan, and was predeceased by three brothers and two sisters. He also leaves eight grandchildren, Carolina (Michael Bryant), Andres, and Danny Dallal; Paul, Justine (Jeffrey Miller), Karl, and Ruth Lindemann; and Ahmed Buttu-Dallal; as well as two great-grandchildren, Cecilia and Maxey Bryant. Numerous cousins, nieces and nephews live throughout the Middle East and wider world.

In lieu of flowers, donations can be made to the following organizations:
One for Three (1for3.org), Palestinian Children’s Relief Fund (pcrf.net), and ANERA (anera.org).

Online messages of sympathy may be left at www.dfwefh.com.

Members of the Love and Rage Media Collective have had the pleasure of speaking and organizing with Shaw in recent years. His commitment to Palestinian liberation has inspired much of the work we do, in fact it was in response to the Israeli attacks on Gaza in the summer of 2014 which prompted the creation of Love and Rage.

We will be following this up with our own piece, in memoriam, in the coming days.

We would also like to extend our sympathies to the local Palestinian refugee community.