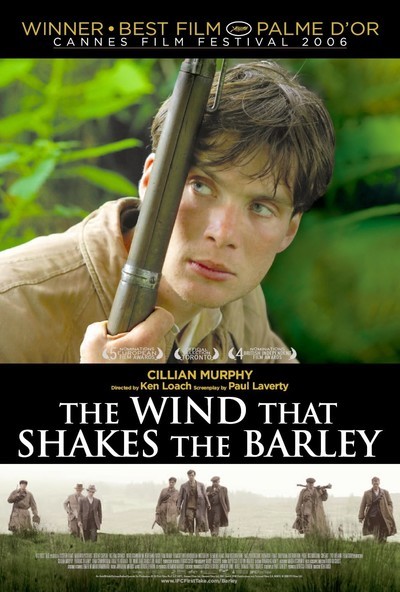 To celebrate St. Patrick’s Day and to honor the long struggle for Irish independence and freedom, the Freedom School will screen this gripping 2006 film directed by Ken Loach and starring Cillian Murphy, Liam Cunningham and Padraic Delaney. KGF Vissers from IMDB describes the film as follows:

In 1920, rural Ireland is the vicious battlefield of republican rebels against the British security forces and Irish Unionist population who oppose them, a recipe for mutual cruelty. Medical graduate Damien O’Donovan always gave priority to his socialist ideals and simply helping people in need. Just when he’s leaving Ireland to work in a highly reputed London hospital, witnessing gross abuse of commoners changes his mind. he returns and joins the local IRA brigade, commanded by his brother Teddy, and adopts the merciless logic of civil war, while Teddy mellows by experiencing first-hand endless suffering. When IRA leaders negotiate an autonomous Free State under the British crown, Teddy defends the pragmatic best possible deal at this stage. Damien however joins the large seceding faction which holds nothing less than a socialist republic will do. The result is another civil war, bloodily opposing former Irish comrades in arms, even the brothers.

The third meeting of the Utica Activist Coalition will take place tonight as part of this month’s slate of Freedom School classes. Members of student, community and activist organizations are welcome to come to this meeting as well as people not (yet) connected to any activist group. Among other topics up for discussion during this class will be organizing a Utica Social Forum among other campaigns and events being planned for the spring and summer. New people and new ideas are always welcome. If you want to get plugged in to local activist groups and community organizing, this is the meeting to come to. Special emphasis will also be placed on gearing up for the Utica Social Forum, World Social Forum and May Day (International Workers Day).

The Mohawk Valley Freedom School is held every Thursday at the Cornerstone Community Church at 500 Plant Street in Utica. Classes are from 7:00-8:30pm. Please contact 732-2382 or mohawkvalleyfreedomschool@gmail.com.