What They Are Not Telling You About Standing Rock

by Shannon Kiss/Guest You will hear of the sea turning black, and many living things dying because of it. You will see many youth, who wear their hair long like my people, come and join the tribal nations, to learn their ways and wisdom. These are the 8th […]

via Democracy Now! On Friday, Amnesty International dispatched human rights observers to North Dakota to monitor the ongoing repression of the thousands of Native Americans resisting the $3.8 billion Dakota Access pipeline. Amnesty’s move came one day after hundreds of police with military equipment arrested over 140 people, after […] 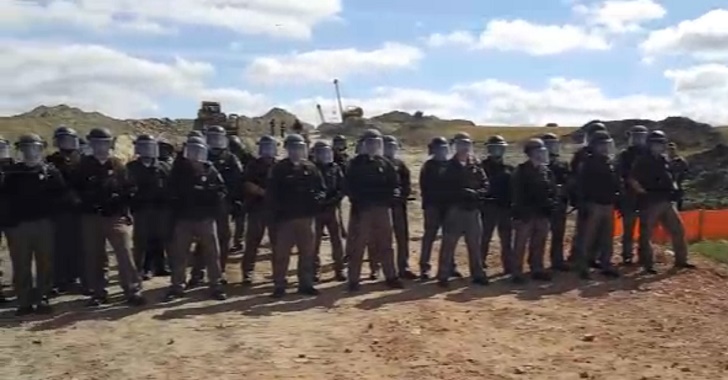 Nick Bernabe/Antimedia MORTON COUNTY, N.D. — It didn’t take long after the National Guard was activated in North Dakota for militarized law enforcement to descend upon the site of the Dakota Access Pipeline. Tuesday, mass arrests began as riot gear-clad police attempted to break up Native American opposition to […]

via Democracy Now! NORTH DAKOTA – Governor Jack Dalrymple has activated the National Guard ahead of Friday’s ruling on the Standing Rock Sioux Tribe’s lawsuit against the U.S. government over the $3.8 billion Dakota Access pipeline. On Friday, U.S. District Judge James Boasberg will rule on an injunction in the […]